The raspberry, with its botanical name Rubus idaeus, belongs to the Rosaceae family, which includes around 3,500 species. The raspberry belongs to the genus Rubus, diverse with around 500 species from diploid to dodecaploid, is a hardy, deciduous climbing shrub that comes in a variety of colours, including red, purple, yellow/gold and black.

Raspberry is found throughout Asia, western North America and Europe and prefers warm southern conditions. Raspberries are grown in regions across the globe where temperatures during the growing season is around 13-21°C. It grows best in slightly acidic soil. However, extremely heavy, compacted soils, in which waterlogging can easily form are unsuitable as plants are sensitive to root diseases. Raspberry bushes should not be planted too close to each other to ensure adequate ventilation of the leaves, which helps to reduce plant diseases and make it easier to pick the ripe raspberries at harvest.

Plants have both vegetative primocanes and fruiting fructocanes which produce fruit on an annual basis from the 2nd year of growth and fruiting can exceed 15 years in favourable environments.

The first commercial sale of red raspberry nursery plants is credited to William Price of Flushing, New York in 1737. Britain popularised and improved raspberries throughout the Middle Ages (ca. 4th Century to the 15th Century), producing larger, higher quality fruit, and began exporting plants to New York in 1771. This led to several commercial growers selecting clones grown in the wild and importing cultivars and seeds in order to produce higher quality crosses of their own. The ancestry of red raspberry breeding is dominated by five parental cultivars; ‘Pynes Royal’ (1913) and ‘Lloyd George’ (1919) derived exclusively from R. idaeus var. vulgatus and ‘Cuthbert’ (1865), ‘Preussen’ (1919) and ‘Newburgh’ (1930) derived from both R. idaeus var. strigosus and R. idaeus var. vulgatus.

World raspberry production is approximately 870,000 tonnes, with Russia being the leading producer, accounting for around 20% of world production. Other major producers are United states, Mexico, Serbia and Poland.

Indigenous to Asia Minor, raspberries were reportedly gathered wild on the foothills of Mount Ida by the people of Troy (Troas, Turkey) in the 1st Century BC with domestication recorded by Roman agriculturist Palladius in the 4th Century AD. Pliny the Elder wrote about red raspberries in 45 AD and described how the Greeks referred to the fruit as “Ida” fruit after Mount Ida (Jennings, 1988). The term “Ida” continued to be used for the fruit; Linnaeus (1707-1778) derived Rubus idaeus from Latin “Ruber” meaning red and “idaeus” thought to be inspired from Mount Ida. Although berries were initially gathered from the wild, the plants were not cultivated for food but were used for medicinal purposes, particularly in the treatment of eye and stomach disorders. Seeds have been found at Roman forts in Britain following archaeological excavation, indicating the spread of raspberry cultivation throughout Europe by the Romans.

The popularity of the raspberry in food and medical uses continued since ancient times when its juice was also used as a red stain in artwork. Consuming a diet rich in raspberries is linked with a reduced risk of both age and lifestyle associated diseases. They have a diverse polyphenol profile of flavonoids, anthocyanins and ellagitannins, ellagic acid, sanguiin H6, and lambertianin which are known to prevent the progression of many pathogenic diseases including cardiovascular disease, type II diabetes, cancer, obesity, and Alzheimer disease.

Through this project it will be possible to explore raspberry germplasm and enlarge the genetic pool to assure genetic diversity, an also share strategies for new breeding tools with all the partners of this project. To develop new raspberry varieties or selections with high fruit quality across a broad range of geographic and changing climatic conditions in Europe is another aim, and to explore and identify sensorial quality factors and consumer quality preferences for different berry species across different parts of Europe. 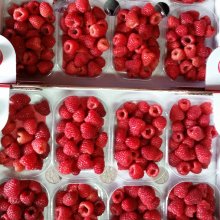 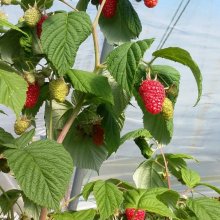 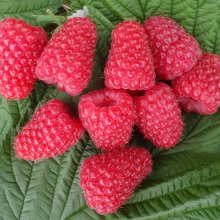